Home Scenic 2022 was not a total bust in Brooklyn

Lots of good things happened, and here are a few

2022 sure was a doozy! But the year wasn’t a total bust. Some good things actually hap-pened in Brooklyn in 2022. And, just as importantly, we avoided some utter disasters. The way things were going, think what might have happened!

Take a walk with the Brooklyn Eagle down 2022’s memory lane of good stuff, so we all can enter 2023 with cautious optimism.

More great things happened in Brooklyn than you might think.

All those cute Halloween parades came back across the borough this year. This one took place on the Brooklyn Heights Promenade. Photo: Mary Frost, Brooklyn Eagle

Community events came roaring back this year: The Mermaid Parade! The Ragamuffin Parade! The Brooklyn Book Festival. All the cute Halloween parades in neighborhoods across the borough. Brooklyn didn’t feel like Brooklyn without these beloved community traditions. This year they were back, and people felt confident enough to get out there and mingle.

Little Amal, the huge puppet of the 10-year-old Syrian girl searching for her family warmed the hearts of Brooklynites and raised awareness of refugee children. Photo: Mary Frost, Brooklyn Eagle

Remember Little Amal? The huge puppet of the 10-year-old Syrian girl searching for her family warmed the hearts of Brooklynites and raised awareness of refugee children. Countless volunteers helped make

the New York City visit possible, with Brooklyn’s St. Ann’s Warehouse playing a major role. “There’s been so much beauty and so many miracles along the way,” said Yazmany Arboleda, the creative producer of Little Amal’s New York visit. 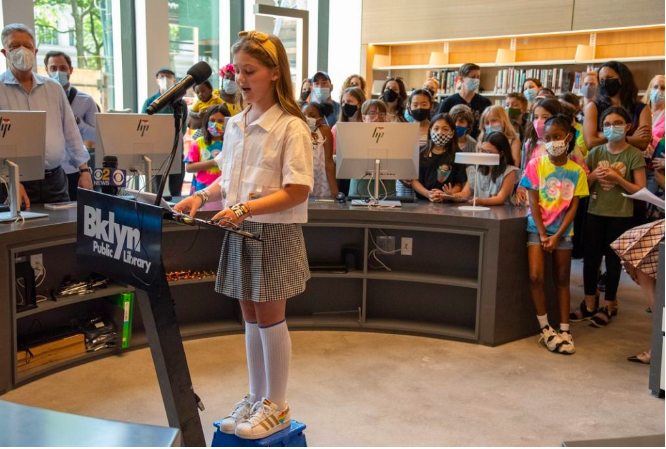 A new library: It took a lot of back and forth, but this year a beautiful new library opened in Brooklyn Heights.

“I’ve been so grateful for our new library branch,” said Heights resident Jennifer Breznay, who said she loves the quiet and welcoming atmosphere. “The externals are fabulous: magnificent light-filled rooms, comfortable study desks with individual electrical out- lets, several multipurpose activity spaces. And the library seamlessly links to the BPL Wi-Fi and makes pickup of holds so easy.” She added, “The visiting speakers are fantastic! I recently saw Elif Batuman (author of The Idiot).”

“When I visit the new library and see all the children with their nannies or parents, it touches my heart! They now have a safe, nourishing place to bring their kids, especially in this winter,” said Beverly Closs, a resident of the North Heights. 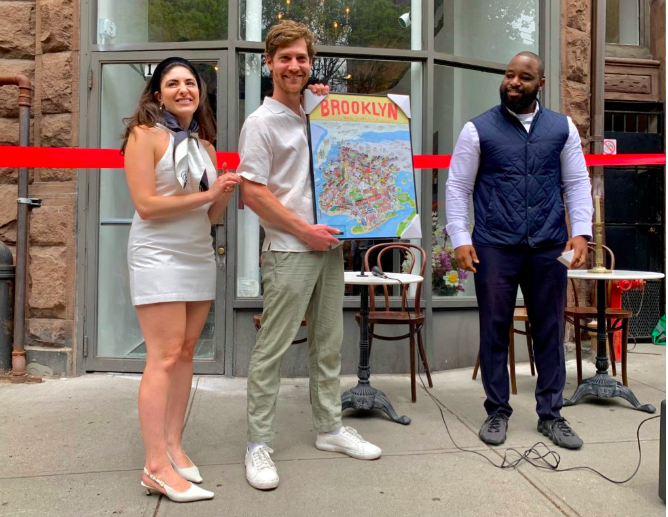 Montague Street came back. It wasn’t long ago when the bot- tom was falling out on Montague Street, the main shopping street in Brooklyn Heights. “I will not easily forget those early weeks of the COVID shutdown when we were going out once a week, and Montague Street was completely deserted,” Erika Belsey Worth, president of the Brooklyn Heights Association, told the Brooklyn Eagle. In 2022 (after years of effort by BHA and the Montague BID), cute and desirable shops began popping up: a French bakery (L’Appartement 4F); a cool poetry center (Brooklyn Poets); a real book store (Books Are Magic); the historic Brooklyn Women’s Exchange

And talk about magic — several of these openings were made possible by community-spirit- ed landlords who met their ten- ants halfway to help return the zing to the street. (Special tip of the hat to the Calfa brothers, Tom and Chris, who made sure the historic Brooklyn Women’s Exchange kept a home in Brooklyn Heights; and Tony Bates, who helped Brooklyn Poets find a home on the street.)

Also joining Montague Street were Blank Street Coffee, a kids art center, a new deli, a martial arts center and some new eateries, helping to make the street a destination once again. 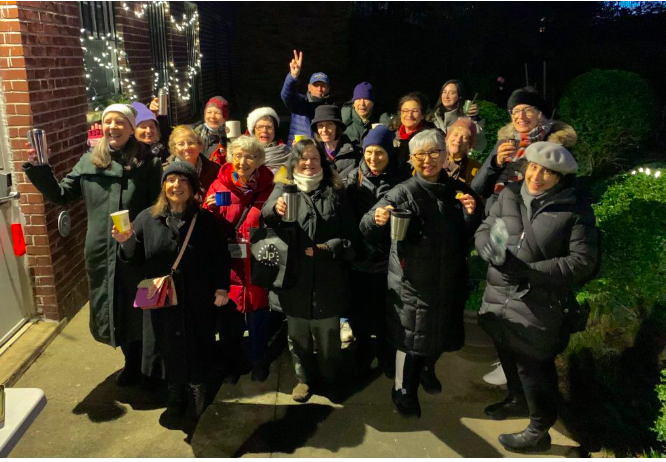 Brooklynites volunteered like crazy: Residents of our borough were amazingly generous in 2022. They raised money for kids with autism; volunteered with CERT (Community Emergency Response Teams) and soup kitchens; ran galas and cleaned up after fundraisers for charities. They donated to Brooklyn Community Foundation to benefit local nonprofits. Folks working with Heights and Hills delivered meals to seniors. Sailors at ONE°15 Brooklyn Marina gave up their free time teaching kids to sail and helped nonprofits raise funds. Volunteers beautified the Promenade Gardens, and got their hands dirty in Prospect, Fort Greene and Cadman parks. And Brooklynites came together to support Ukraine. 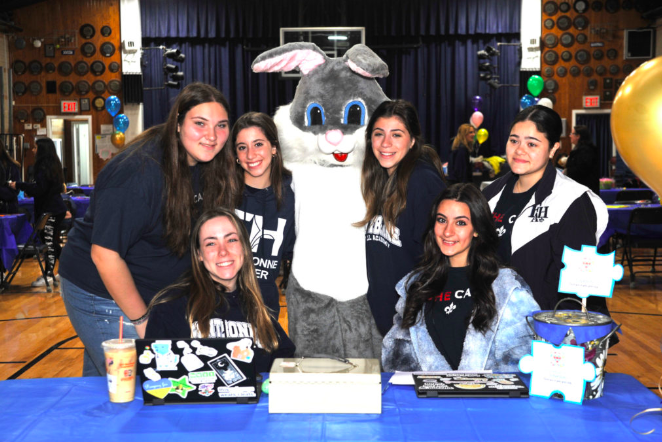 One volunteer who raised our spirits was performer Peter Kendall Clark, who started singing opera and show tunes for free during the pandemic. The performances evolved into weekly events that be- came known as Songs from the Ledge. In 2001, BHA named him a Community Service winner; in November 2022, NY1 voted him “New Yorker of the Week.” 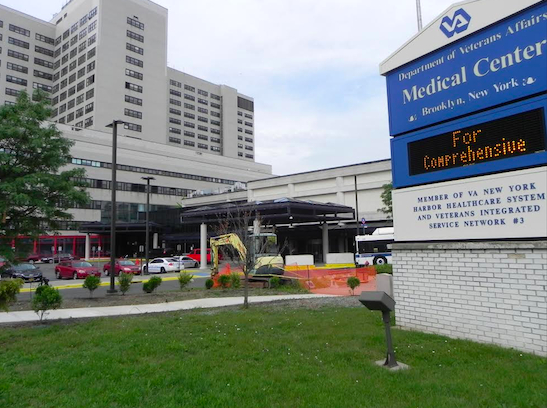 Brooklyn’s VA hospital was saved, after a major push by veterans, by U.S. Sen. Chuck Schumer, U.S. Rep. Nicole Malliotakis and many other local officials. 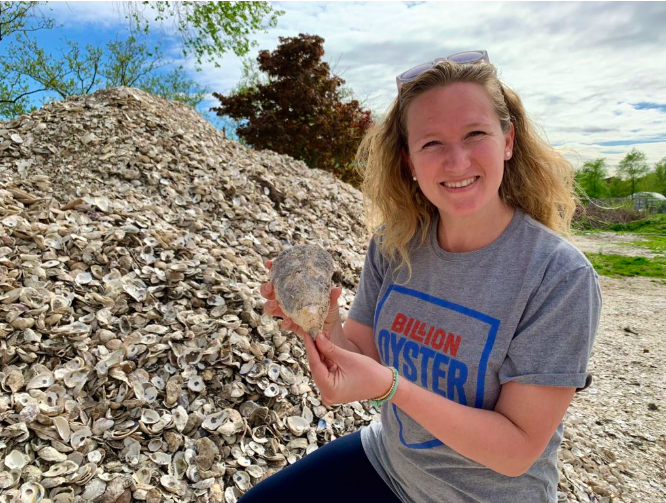 Oysters and mussels, alive, alive-o: New York City was once the oyster capital of the world, with “oysters the size of dinner plates” in the Gowanus Canal. After years of seeding by the Billion Oyster Project, the bivalves are coming back in the Hudson and East rivers. In Gowanus Bay, volunteersand scientists working with RETI have been planting kelp and bringing back oysters and mus- sels on floating field stations.

Community Fridges: Community refrigerators began popping up in neighborhoods during the pandemic and became a regular feature in 2022. From Brooklyn Heights to Brownsville, community fridges are stocked with food by organizations and volunteers. Neighbors helping neighbors, no strings attached.

Street markets: Remember when street life dried up? This year many markets came back, including the Market at Brooklyn Museum, bringing hand- crafted products and a place to gather, listen to music and re- lax. “You can just exhale for a moment,” said area resident Migdalia Rodriguez. Other street markets bringing community members together in 2022 included Brooklyn Flea, Smorgasburg, the Borough Hall Holiday Market (new this year) and the roving FAD Market.

Amazing online community groups: Russian trolls may be doxing you on Twitter, but your fellow Brooklynites were pretty wonderful on local social media in 2022. Your neighbors on Nextdoor went out of their way to point you toward the best local dentist or bakery. Someone on the local buynothingproject.org probably had a free pair of gloves just your size. “Give, receive, lend, share and show gratitude” is the community’s motto. 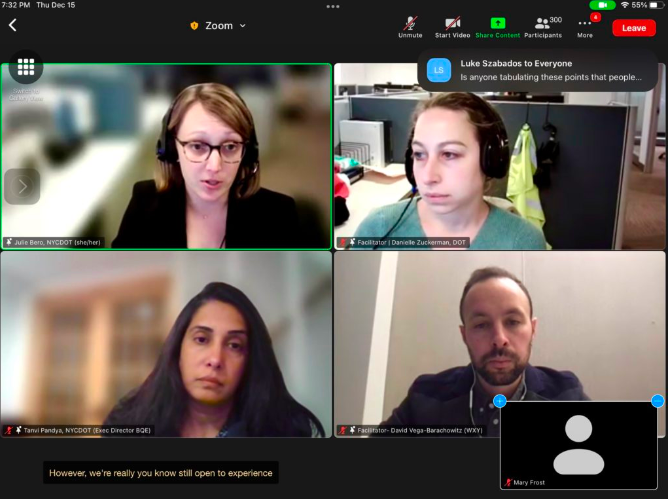 Having Zoom (and other meeting apps) available for on- line meetings increased public participation at communi- ty board meetings, get-togethers, and city-run workshops on important issues like the redevelopment of the Brook- lyn-Queens Expressway (BQE), as shown above.
Screen grab of DOT workshop leaders by Mary Frost, Brooklyn Eagle.

Zoom meetings: Some people hate them, especially “people people,” whatever they are.

But having Zoom (and other meeting apps) available for online meetings has increased public participation at community board meetings, get-togethers, and city-run workshops on important issues like the redevelopment of the Brooklyn-Queens Expressway (BQE). At one recent BQE Central workshop held on a rainy night, dozens of community members showed up, while at a similar workshop held via Zoom, more than 300 people participated.

The post 2022 was not a total bust in Brooklyn appeared first on The Brooklyn Home Reporter.