As everyone discusses where to run when Twitter collapses, get back to what really matters and decide where to go in real life now, during a holiday season that feels relatively normal. (If you’re still feeling social anxiety, it might help that recreational licenses have finally been approved for 36 marijuana dispensaries in New York.)  Brave the upcoming frigid weather for comedy shows, salsa dance parties, holiday events, even fireworks, and reclaim the spirit of the season. Spread good cheer wherever you go, and allow the flicker of 2022 to go out behind you (good riddance!) as you stoke the flame of the new (and, hopefully, better!) year ahead.

In NYC, the only option for the suburban tradition of driving around looking at Christmas lights is the spectacular Dyker Heights (which is definitely worth a visit), but otherwise, Lightscape fits the bill. After dark, the Brooklyn Botanic Garden will transform into an illuminated artscape with over a million dazzling lights. Buy a ticket, and follow a trail while you’re serenaded by site-specific sound and music. This outdoor dazzling light show sold out last year, so plan ahead if you’d like to visit. Brooklyn Botanic Garden, 990 Washington Ave., Prospect Heights. Tickets: adults $40; kids $20; babies free.

How can we achieve the enlightened goodwill of the holidays with a barrage of bad news seemingly always coming for us? Sometimes, all you can do is laugh. Start off the holidays with a comedy show. The Female Gaze, a parody of The View, is billed as a “rapid-fire round up of pop culture, news bites, and hot tips for how to survive each and every disaster our planet is currently facing.” With a cast of 15+ veteran comedian co-hosts and special guests, this is sure to be just the cathartic event you need to release all the stress you’ve been holding for years and learn to pull your lips into a smile again. Asylum NYC, 307 W. 26th St., Chelsea. Tickets: $18. 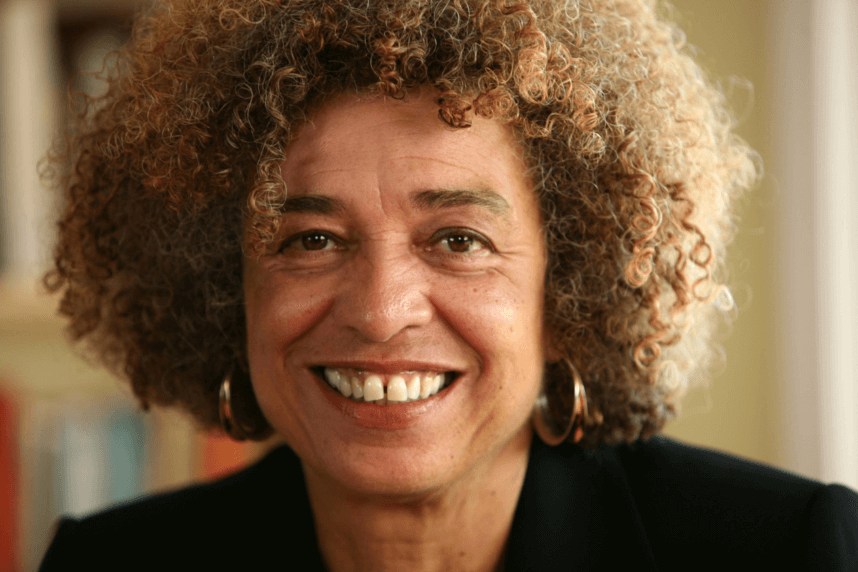 Don’t miss this opportunity to hang out with one of our seminal activists, writers, and lecturers of our time. Known for her work as a political activist at the cutting edge of the Black Liberation, feminist, queer, and prison abolitionist movements, this conversation, with Keeanga-Yamahtta Taylor, will be focused on the new edition of her classic memoir, which was first published and edited by Toni Morrison in 1974. Her life is nothing but fascinating, and this talk should be riveting. (Also, might be a good place to jump-start your gift-giving with a signed edition for your loved one.) BAM Strong, 651 Fulton St., Fort Greene. 7 pm. Tickets $15; $40 with a signed copy. 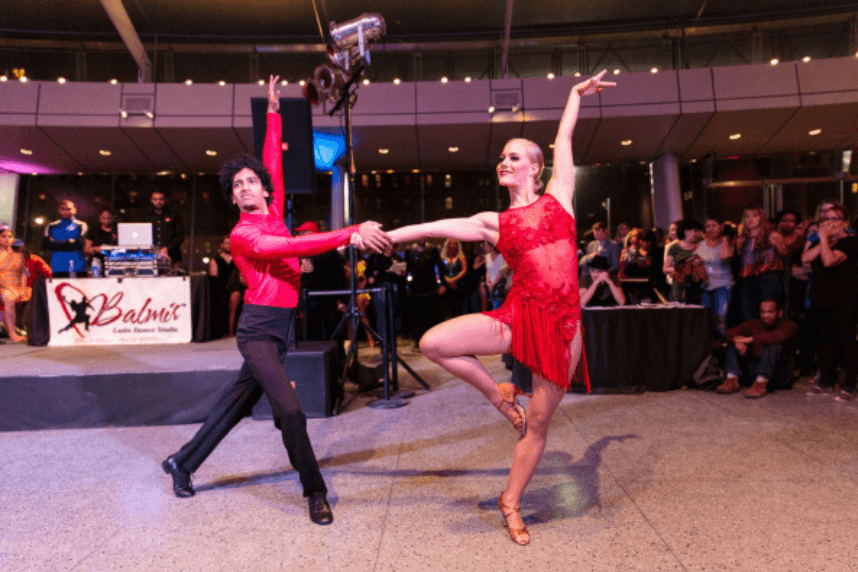 It’s hard to be in a good mood when it’s cold outside. Instead of complaining, get yourself to an After Work Salsa Party at the Brooklyn Museum for a big dose of heat. The party starts with a dance lesson led by a professional (so wear your best salsa shoes) and then watch the experts as they show you how it’s done with performances by Brooklyn’s best Latin Dance Teams and live music. Think of this as a free supplement to your Vitamin D. 6 pm, Brooklyn Museum, 200 Eastern Parkway, Prospect Heights. Free, but registration is required.

Usually, if a movie has too much pre-release buzz, it’s a turnoff and I start to resent the movie before I even see it. But with Darren Aronofsky’s new film, The Whale, I believe it will be better than I could imagine. Brendan Fraser is an absolutely incredible and underrated actor (see: Gods and Monsters, 1998) who has made terrible career choices (see: The Mummy, 1999) which I blame on his agent, whoever that may be. Produced by A24, a production company that takes provocative chances, the film premiered at Venice Film Festival where Fraser garnered a six-minute standing ovation for his comeback role, reducing the actor to tears. 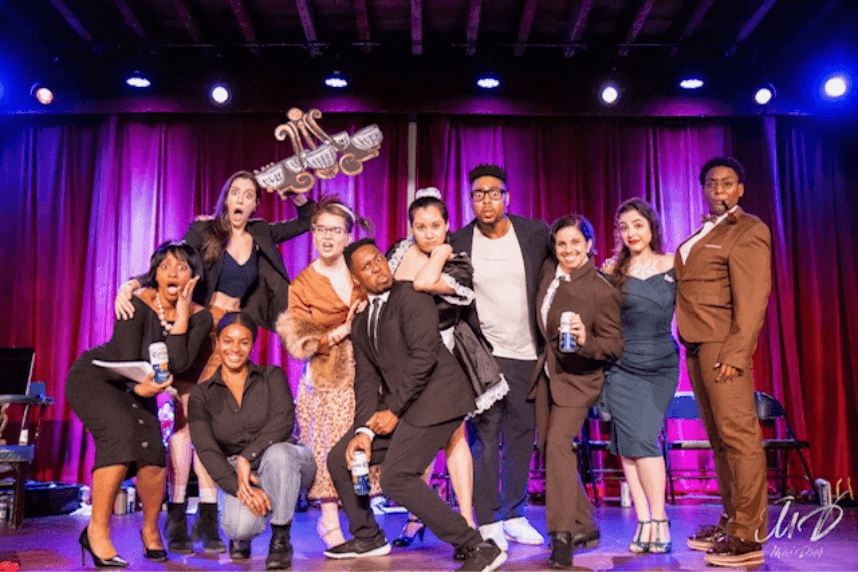 The cast in A Drinking Game presentation of Titanic. Photo: Mai Dror

The holiday season is full of great performances around the city. Maybe you always go see the Nutcracker at Lincoln Center, or maybe you were lucky enough to score tickets to Slanted! Enchanted! A Pavement Musical at The Sheen Center. If not, maybe this is the year you sink into some deep nostalgia while you drink the holiday stress away. A Drinking Game Live will present one of the best holiday movies along with a live-staged reading, and every time you hear a buzzword, everyone drinks! The Bell House, 149 7th St., Gowanus. 7 pm, but arrive early for seats. Tickets: $25.

It’s hard not to smile when listening to female rockers Wet Leg. They pulled off an infectious punk-ish hit, “Chaise Longue,” named after a bougie piece of furniture (we call it a lounge, the French say it’s a “long chair”). Their band name sounds sexy in a fetishy way, but they alternate between claiming it means nothing and tracing it back to an epithet from their home in Britain, the Isle of Wight, that is slang for non-locals. Now the cheeky frontwomen are headed to New York for a string of sold-out shows. Tickets on the resale market are fetching $100+ per, more than you might pay to see your typical indie outfit at the Music Hall of Williamsburg or Elsewhere, but hearing this pair in a smaller venue will be worth the price if you’ve been listening to them on repeat for the past year. Dec. 13, Webster Hall; Dec 14, the Hall at Elsewhere; Dec. 15, Bowery Ballroom, Dec. 16, Music Hall of Williamsburg.

Although super fans of Knives Out may have already seen the sequel, Glass Onion: A Knives Out Mystery, during its limited theatrical run, this is the day it becomes available for streaming on Netflix. My prediction is this will be the perfect movie compromise for the muti-generational family warfare better known as “choosing a movie to watch on Christmas Day.” If it’s anything like the first, the PG-13 rating makes it appropriate for tweens but accessible for elders. An all-star cast includes Daniel Craig, Kate Hudson, Ed Norton, Janelle Monáe, as well as everyone’s favorite, Kathryn Hahn gallivanting on a private Greek Island. This murder mystery will be the perfect escape from your own family drama. Streaming on Netflix. 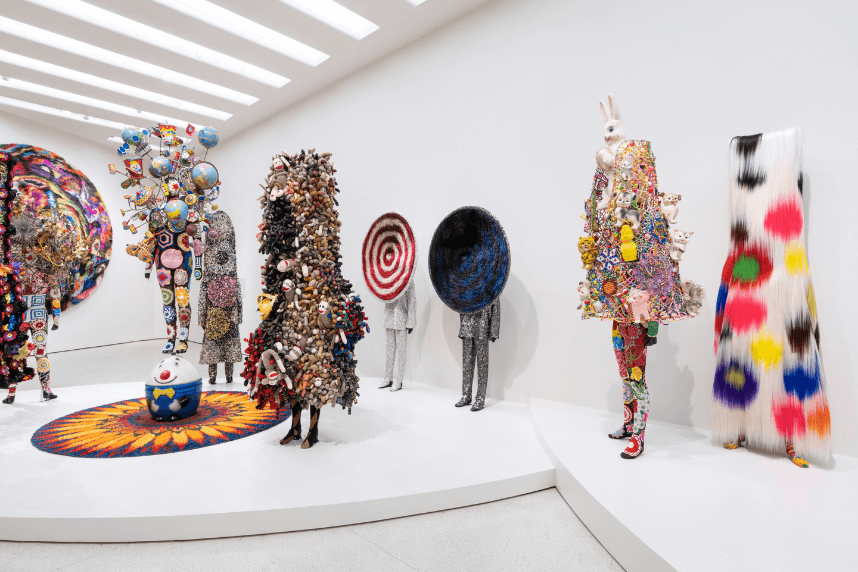 What kind of art speaks to an isolated, marginalized, and overstimulated world? A Chicago artist, Nick Cave is probably most known for his Soundsuits, which I was lucky enough to see in 2013 when the artist filled Grand Central with a band of Soundsuited horses, and is the focus of a new Guggenheim exhibit. The show notes for Forothermote explain this survey honors the artist’s lifelong commitment to creating space for those who feel marginalized by dominant society and culture, and that it was influenced by both George Clinton’s Parliament-Funkadelic collective and Bauhaus. There’s an argument that Nick Cave’s “elaborate and found-object installations” might be the surreal and timely work we need right now. Guggenheim, 1071 Fifth Avenue, NYC. $18 Adults, $15 Members. 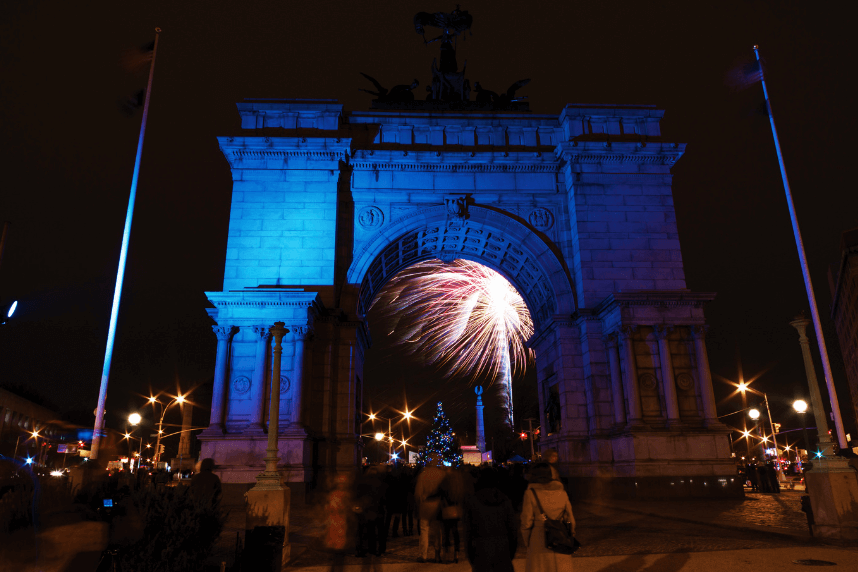 After two years off, the New Year’s fireworks are finally coming back to Brooklyn, a tradition that ran for four decades before a global pandemic curtailed everything fun. If this is the year you want a return to normalcy, huddling up in the cold with hundreds of strangers to watch a spectacular show hosted by Brooklyn Borough President Antonio Reynoso, NYC Parks, and Prospect Park Alliance may be the fresh start you’re looking for. Or better yet, maybe this is the time to reconnect with a friend who has a roof deck or a fire escape with a sky view near Grand Army Plaza. Either way, reach out to those you know and hold them close because we’ve made it through some challenging times and we’re one more year away from the dumpster fire of 2020. It’s 2023, baby! Bottoms up. 11pm- 12:30am, Grand Army Plaza. Free.

The post December Culture Calendar: 10 events, films and shows to conjure the holiday spirit  first appeared on Brooklyn Based.

Did you miss our previous article…
https://brooklynjim.com/remembrance-held-for-traffic-victims-3/