Home Scenic On the Avenue: ‘23rd on 3rd’ turns 3rd Ave. pink for cause

Now, this is a bus no one minds waiting for! The mammogram bus rolled into town on Sunday, Oct. 23 to offer free mammograms to qualifying women during the “23rd on 3rd” #ShopPinkBayRidge event organized by members of the Merchants of Third Avenue Civic Improvement Association, Inc. to raise money and awareness in the fight against breast cancer.

The annual event, organized by Jeanine Condon of Charmed by JLM, Danielle King of The Ridge Kids and The Ridge, and Chrisie Canny of Vented in Brooklyn, is held in honor of Breast Cancer Awareness Month each year.

Third Avenue became a sea of pink as participating merchants “on the avenue” flew pink balloons outside their shops and agreed to donate a portion of the day’s sales to Making Strides Against Breast Cancer.

“We’re so grateful to all of the merchants along Third Avenue who take part in this wonderful event each year and agree to give back in the name of finding a cure,” Condon said.

Panelists prepare to speak with visitors inside The Ridge, colorfully clad in pink balloons for the “23rd on 3rd” #ShopPinkBayRidge event. Photo courtesy of Chrisie Canny

“Our thanks to Councilman Brannan for bringing the mammogram bus to Bay Ridge,” Merchants President Dan Texeira of Lincoln Brokerage said. “This free and vital service is certainly appreciated by the event organizers and everyone who was able to take advantage and get the care they needed.”

After a long day of shopping and raising money, visitors enjoyed a panel discussion featuring Canny, Nancy Anderson, Maureen Brody from the Green Spa and Christine Fitzpatrick at The Ridge, 8121 Third Ave.

Adelphi Academy of Brooklyn’s submissions into the Bay Ridge Community Council’s 70th Annual Fall Poster and Window Painting Contest were so good, it was scary!

Six fall- and Halloween-themed scenes were painted onto the windows of Ridgewood Savings Bank and Northfield Bank by Adelphian artists and, according to Head of School Iphigenia Romanos, all six received gold medals!

“We were thrilled to find out that each of our talented student artists had been selected as a gold medal winner in this year’s contest,” Romanos said. “It’s really a testament to Adelphi’s continued focus on the arts as a key component in daily education. We are grateful to the Bay Ridge Community Council for keeping this wonderful fall tradition alive and for recognizing young artists for their great work in a public forum.”

Congratulations to Adelphi and to all of the schools that participated in this year’s contest. The multitude of beautifully painted windows certainly made for another memorable Halloween “on the avenue.”

Trunk or treat! Yes, you read that right.

The latest edition of the Bay Ridge Fifth Avenue BID’s #FunonFifth events took place “on the avenue” on Friday, Oct. 28 and featured 16 vehicles with decorated trunk space on display capturing the spirit of Halloween. 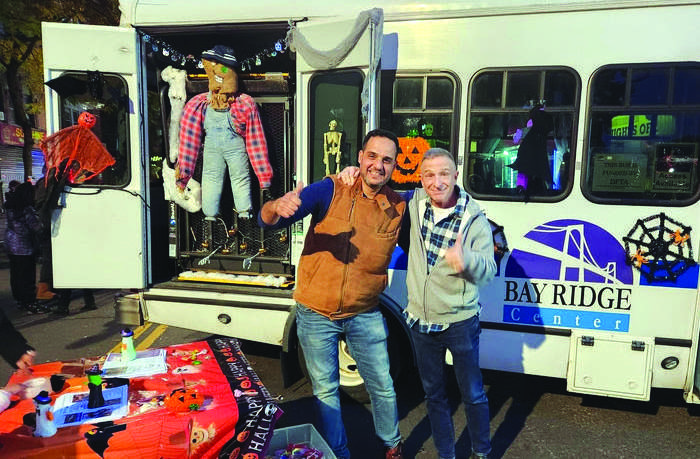 The crew from BRAVO decorated the back of an ambulance and greeted trick-or-treaters all night. Executive Director Todd Fliedner and the staff from the Bay Ridge Center brought the center’s van, which was elaborately decorated with a giant scarecrow, plus bats and witches galore.

There were also rides, games and crafts for costumed kiddies to enjoy, as well as a giant pumpkin patch. The event drew thousands of families, prompting BID officials to say they hope to make “Trunk or Treat” an annual Bay Ridge event.

The post On the Avenue: ‘23rd on 3rd’ turns 3rd Ave. pink for cause appeared first on The Brooklyn Home Reporter.