The 68th Precinct Community Council has resumed in-person monthly meetings, but not at its traditional meeting site.

Since the stationhouse opened on 65th Street – with the rare exception of a joint annual meeting with the Dyker Heights Civic Association – the monthly proceedings took place on the main floor. This venue provided an unobstructed view of the guest speakers and police officials. Instead, the meetings have been moved across the street to a small community room in the Bay Ridge Towers, where some sight lines are blocked by pillars.

A lieutenant speaks to the crowd as Deputy Inspector Andrew Tolson looks on.

This month’s meeting drew one of the largest crowds in many years, due to the perceptions and realities of recent crime rates.

A front page headline in the NY Daily News the day before railed, “Wild, Wild West, nabe of Bay Ridge – it’s ‘a free-for-all out there.’” The paper included a report that grand larceny in the 68th Precinct is up 42.8 percent more than last year, according to data from the NYPD.

Deputy Inspector Andrew Tolson, the precinct’s commander, was peppered with complaints at the meeting as to why this community is no longer safe. People mentioned store break-ins, stolen packages, ladies afraid to go out in the evenings, loud music being blasted at night, sex traffic, auto thefts and assaults.

Pillars in the community room blocked some views.

One woman said it was outrageous to go into Rite Aid and have to wait for a store clerk to unlock a transparent compartment to buy a toothbrush. Discussions got so heated that the C.O. walked over and had the cop live-streaming on Twitter and Facebook shut down the video feeds. Up to that point, the precinct’s Twitter account showed 751 viewers.

The early part of the meeting, however, was quite civil. Since October is Breast Cancer Awareness Month, the council had as its guest speaker Sheila Willis, a community healthcare representative from the Beatrice W. Welters Breast Health Outreach and Navigation Program at NYU Langone’s Perlmutter Cancer Center. 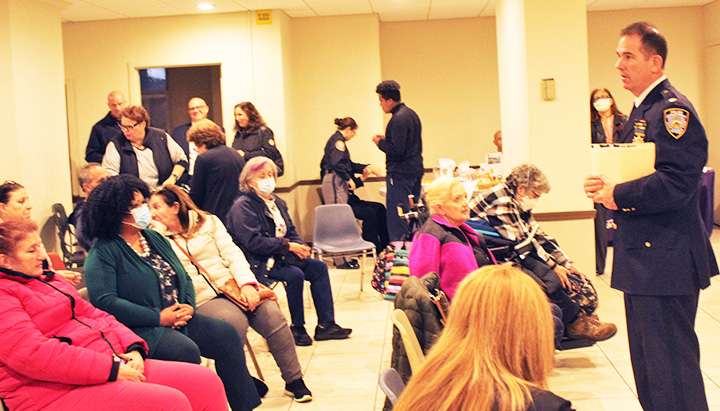 Next, Deputy Inspector Tolson called P.O. Kevin Anderson front and center to receive a citation as “Cop of the Month.” Describing him as one of his best cops, Tolson told of how Anderson arrested a perp who had earlier walked into a smoke shop near 81st Street and robbed the owner and two patrons.