Assemblymember-elect Lester Chang and supporters gathered Saturday in Sunset Park to reaffirm that he is a Brooklyn resident and to share outrage that the Assembly is seeking to challenge his eligibility due to residency concerns.

But Democratic Assembly Speaker Carl Heastie called for the Assembly Judiciary Committee to review Chang’s eligibility. According to the Associated Press, the committee is likely to examine records such as utility bills and mortgage statements.

Under state elections rules, Chang was required to have been a resident of Brooklyn for 12 months prior to Election Day in order to be eligible to run for the Assembly. The Assembly majority claims he spent some time living in Manhattan.

Plenty of supporters showed up for the rally.
Eagle Urban Media/Photos by Arthur De Gaeta

Abbate told this newspaper that he contended during the campaign that Chang didn’t live in the district.

“Then subsequently in September, October, we found out he didn’t fulfill his requirement of living in the county for one year prior to the election,” Abbate said. “You want to be an elected official, you should be able to abide by the law. All he has to do is produce evidence that he’s lived in Brooklyn for a year, and to this point I don’t think he’s done that yet. It’s up to the Assembly itself and now the judiciary committee is looking into the matter.”

“They had someone else running against me,” he said. “That person dropped out conveniently and they substituted him in. They keep saying, ‘Why didn’t you challenge him during the petition process?’ They’re just extending another lie because he didn’t file petitions.”

During the rally, Chang, a military veteran, said he lives in the same Brooklyn house in which he grew up.

“My family bought the house in 1972,” Chang said. “When another serviceman asked me where I was from, I said from Brooklyn, New York, of course. That’s where I came from and that’s the God’s honest truth. I am shocked and disappointed in anyone that would accuse me of anything else.”

Chang said he lived in a Manhattan apartment with his wife until she died in 2019 but that he still had a residence in Brooklyn. After his wife’s death, he spent more time in his Brooklyn home taking care of his 95-year-old mother, he added.

“By November 7 of 2022, it is of no question that Brooklyn was my primary residence,” he said. “Remember, I never left.”

Chang told the crowd that he also spent time in Manhattan because he was in the New York Naval Militia and was called to active duty during the COVID-19 crisis. He was stationed at the Javits Center and quartered in Manhattan.

“During this time, I continually returned to my home in Brooklyn when my military service did not require me to be at the Javits Center,” he said. “I am personally offended that anyone would challenge my honor and integrity. I will always live by my Navy core values of honor, courage and commitment.”

Chang said the Assembly Judiciary Committee questioning his Brooklyn residence mailed their letters to his home address in Brooklyn.

Brooklyn’s Republican Party Chairman Ted Ghorra said the Brooklyn Democratic Party reviewed and ran specs on hundreds of candidate petition submissions this past spring and had more than ample opportunity to challenge Chang’s petitions and residency in court, but they chose not to.

“Assemblyman-elect Chang is the first Asian-American from Brooklyn ever elected to state office,” Ghorra said. “One would have hoped that his accomplishment would have been celebrated by Republicans and Democrats alike, especially in a district that is majority Asian-American. However, raw partisan politics sadly intervened, and that’s unfortunate.

“Assemblyman-elect Chang won fair and square on Election Day, and he deserves to be seated in January as much as any other state Assembly member. What’s happening is wrong by every measure, plain and simple, it has incensed many communities as they watch this charade.”

Chang’s attorney John Ciampoli said during the rally that it’s not known what evidence the complainants possess or what the complaint is based on. 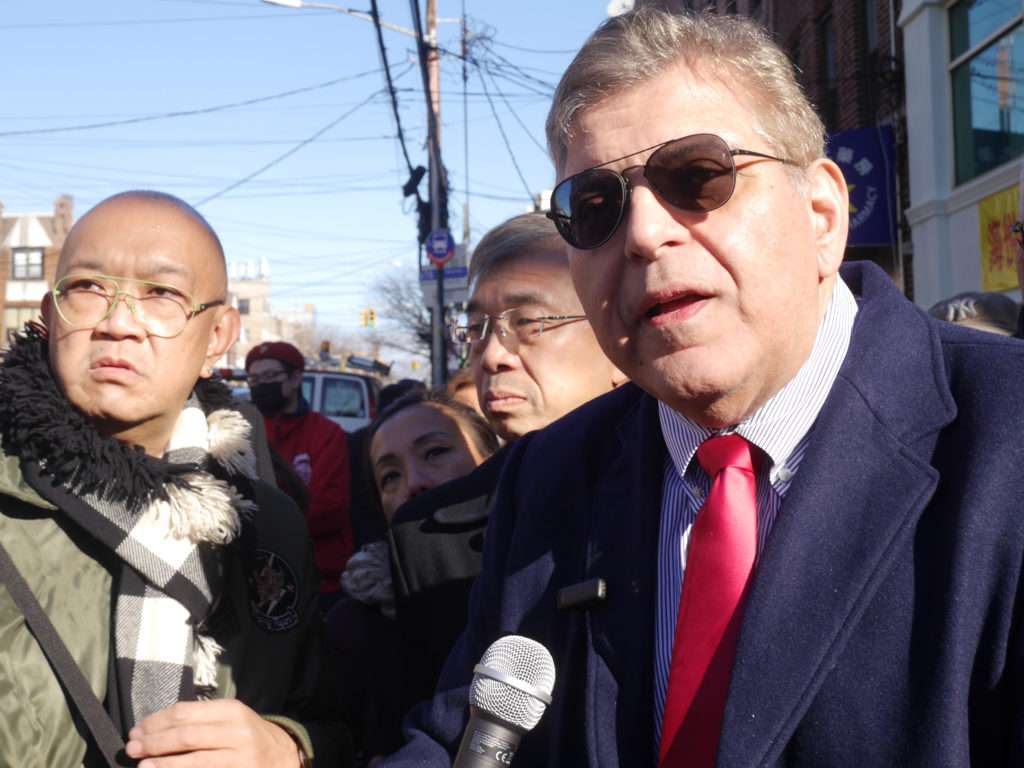 “You don’t challenge the man after he won the election,” Ciampoli said. “This is, ‘We don’t like the results of the election. We don’t like what the people did. We are the New York State Assembly Majority and we’re going to reverse it.’ Well, we are going to stand up, fight it and win. The people in this district will have their voices heard. They will have their elected assemblyman seated by the right Legislature, by the Legislature he was elected to, by you the people in Brooklyn.”

The Assembly Judiciary Committee will hold a hearing Dec. 19 to review Chang’s eligibility for the seat.

Gov. Kathy Hochul would call for a special election if Chang is rejected. If there is such an election, Abbate said he hasn’t made a decision on if he would run but would consider it.

“Whatever happens, happens and I would give some thought to that or helping someone else,” he said. “This is just sad. I’ve done this for 36 years. My constituents are like family to me. To do this to them is really unfair.”

The post Republicans rally behind Chang as Dems and Abbate still challenge residency and petitions appeared first on The Brooklyn Home Reporter.

Did you miss our previous article…
https://brooklynjim.com/december-culture-calendar-10-events-films-and-shows-to-conjure-the-holiday-spirit/